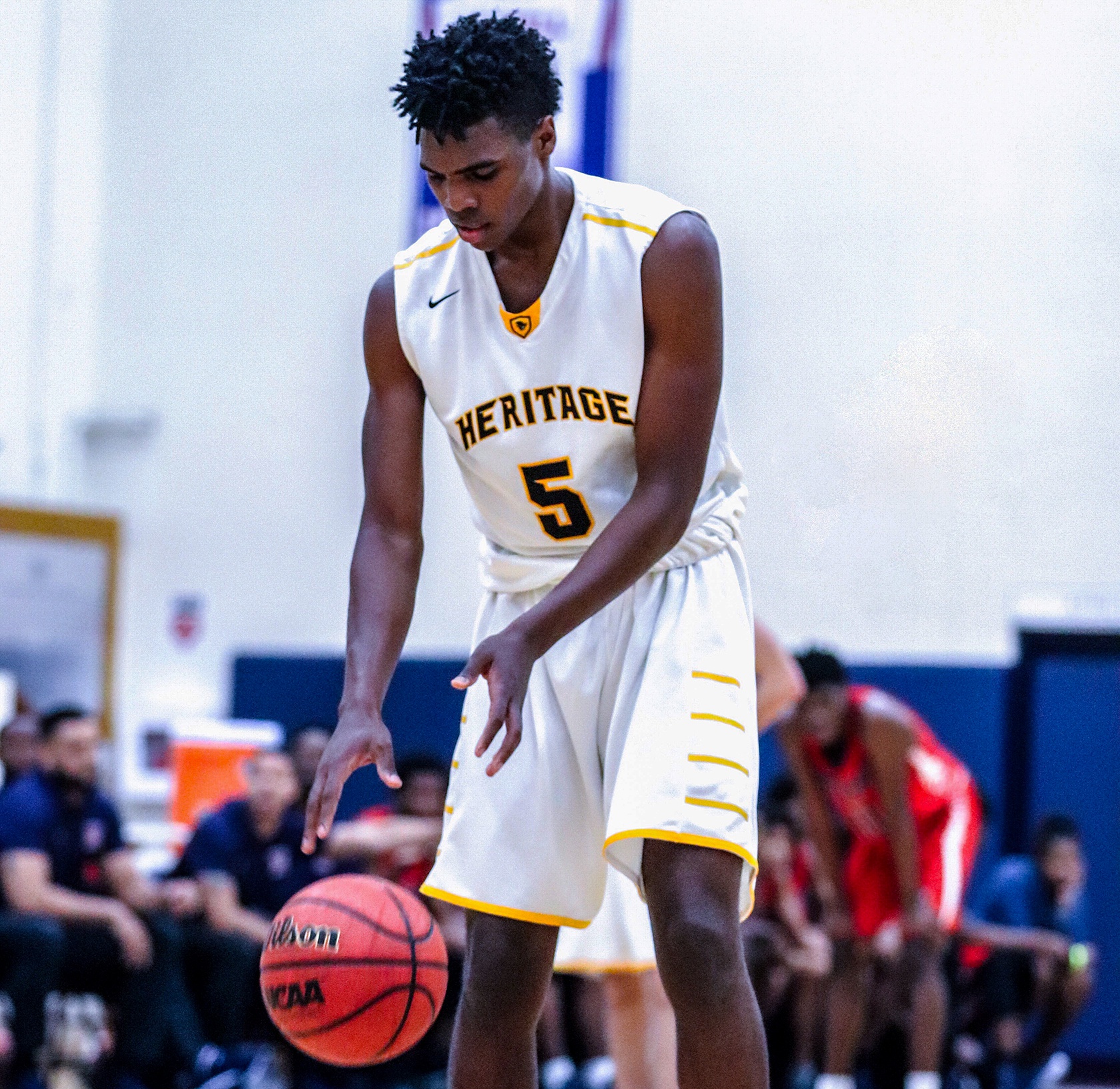 In its district 6-6A quarterfinal matchup, the No. 3 seed American Heritage Patriots defeated the No. 6 seed Pompano Beach Golden Tornadoes 66-37. Junior Andrew Volmar led all scorers with 17 points as American Heritage used a 23-7 second quarter to secure the victory.

The playoff matchup was the second meeting between the two sides as the Patriots defeated the Golden Tornadoes 73-56 back in January. In that contest, Zaire Wade was active and finished with 26 points. The rematch proved to be not as close as Pompano Beach struggled to find any rhythm on both ends of the floor.

“Their outside defense was a little weak today, so it was easy for me to get to the basket,” said Volmar. “I just had to realize their defense was not playing a lot of help side. I had to get a few more buckets in the second half with Dahveon Morris out. I needed to take over a little bit.”

Morris, who is Zaire’s cousin, took a tumbling fall in the third quarter after attempting a block on a lay-up by Cedrick Camper. The Patriots were up by a score of 40-20 with 3:58 remaining at the time. The junior awkwardly flipped over onto the floor and stayed down for several minutes. Eventually, Morris was able to get up under his own power to cheers from the crowd. Head coach Fred Battle confirmed Morris will be in concussion protocol for at least five days.

American Heritage will face No. 2 seed Hallandale High School on Wednesday in the district semi-final.

Despite the scare, the Patriot advantage was already well in-hand as a result of Pompano’s insufficient perimeter defense and an inability to score.

Pompano’s 37 points tied its second lowest point total of the season. The Golden Tornadoes hit two 3-pointers despite attempting many 3-pointers throughout the course of the game.

American Heritage would take full advantage, going on a 17-3 run in that decisive second quarter with multiple trips to the free-throw line on aggressive drives to the rim by Volmar and Morris. The Patriots were able to capitalize off nine Pompano Beach team fouls for seven made free throws.

Behind Volmar, the Patriots got contributions from seven different players. Senior Masai Olowokere finished with 14 points while Morris chipped in with eight, before exiting the game.

“It is playoff time now, so a lot of team’s are going to know we shoot a lot of threes,” said Battle. “We have to use that to our advantage. When they come to close out hard, we need to shot fake and get into the lane. That will get us lay-ups or create opportunities for other people. We started to do that in the second quarter and that is when the game opened up.”

“When we get in a habit of settling for threes, we keep teams in the game. If we are not making them at a high percentage, we give up long rebounds and our opponents get out in transition.”