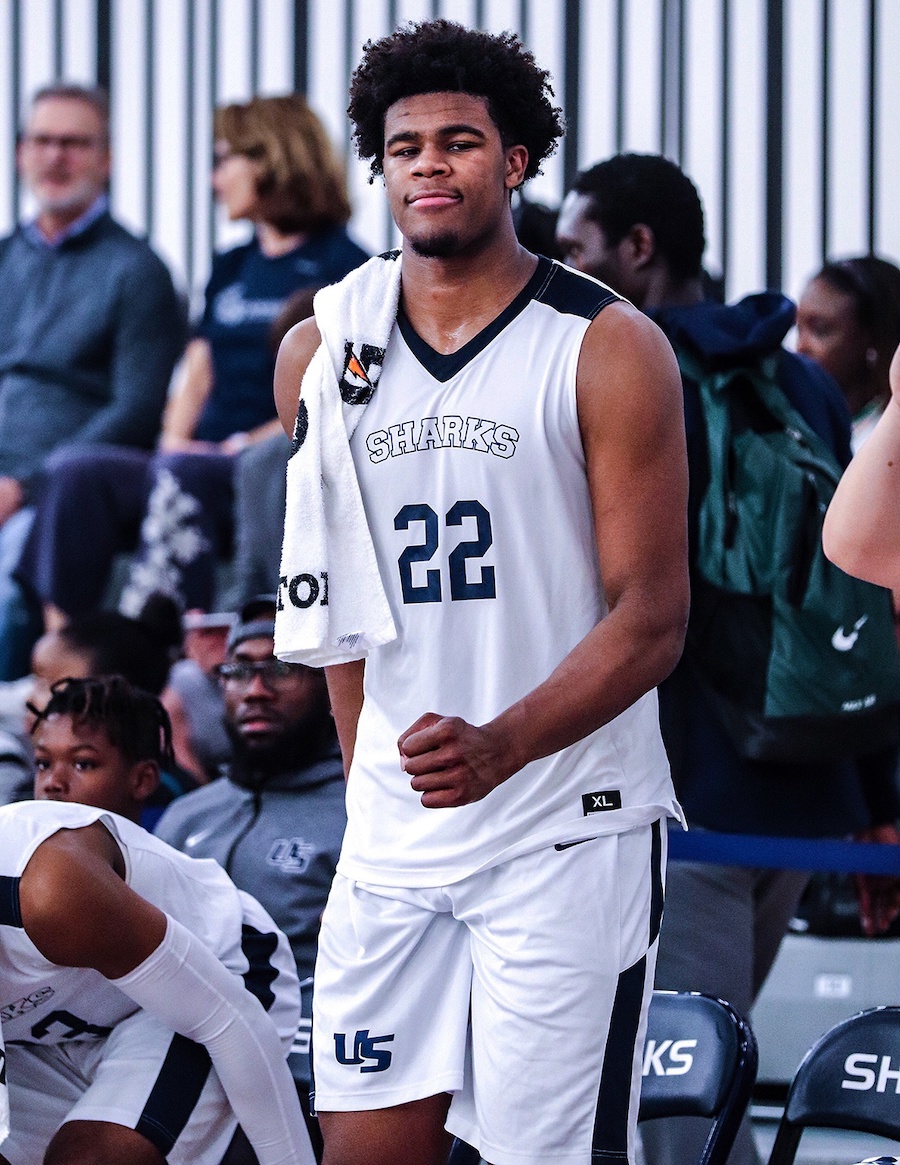 After a festive pre-game ceremony featuring Duke bound Vernon Carey Jr., the University School Sharks fought off the Schoolhouse Prep Wolfpack for a 68-59 win. Carey, who was joined by his family for senior night, finished his final regular season contest as a Shark with 27 points.

Carey, who will trade palm for pine trees when he heads to Duke in the fall, hit a wing 3-pointer to cut the Wolfpack lead to 43-42 with 2:36 remaining in the third quarter.  The bucket sparked the Sharks on an 8-0 run to end the quarter for a 47-43 lead.

“Being here for four years, I wanted to create a legacy and leave my legacy here,” said Carey. “It is big for all of our seniors, playing our last game on an emotional night. I feel like we came out kind of slow, but we picked it up towards the end.”

The Sharks did appear sluggish early-on. Schoolhouse Prep opened up a 18-15 lead after the first quarter. The Wolfpack used a balanced attack to open up the game with six different players registering a point.

The quiet start continued in the second with the Wolfpack closing out the quarter with an uncontested fast break lay-up by junior Cedrick Saint Jean. A frustrated Jim Carr took his jacket off and went to the locker room down 34-27.

Saint Jean led the Wolfpack with 13 points at the break. Carey kept the Sharks afloat with 15.

Luckily for Carr, his marquee star changed the narrative in the second half. Following the Carey three, freshman Taylor Hendricks hit a short bucket in the lane and junior Scottie Barnes hit a baseline driving lay-up for a 3-point play. It was a small cushion for the Sharks, but just enough to fend off a Wolfpack team that led for the better half of 20 minutes.

The Sharks tacked on two more unanswered field goals before a Wolfpack basket in the fourth closed the run.

Now trailing, the Wolfpack’s Achilles heel was its 3-point shooting. With the outcome still in striking distance, Schoolhouse Prep could not hit a game-changing long ball as Carey did earlier in the game. The Wolfpack only hit four 3-pointers on the night.

“They really gave us a battle for 32 minutes,” said head coach Jim Carr. “They are one of the hardest playing teams we are going to play all year. If they shoot it at a little better rate they are a state championship team.

“They were on every pass and on every dribble. They were rebounding on an elite level. We could not guard them well man-to-man so we had to go zone. Our strength is our forwards and our forwards really played well tonight. Vernon was special around the rim. Scottie was making plays for others. Hendricks gave us a good lift as well so that really helped us.”